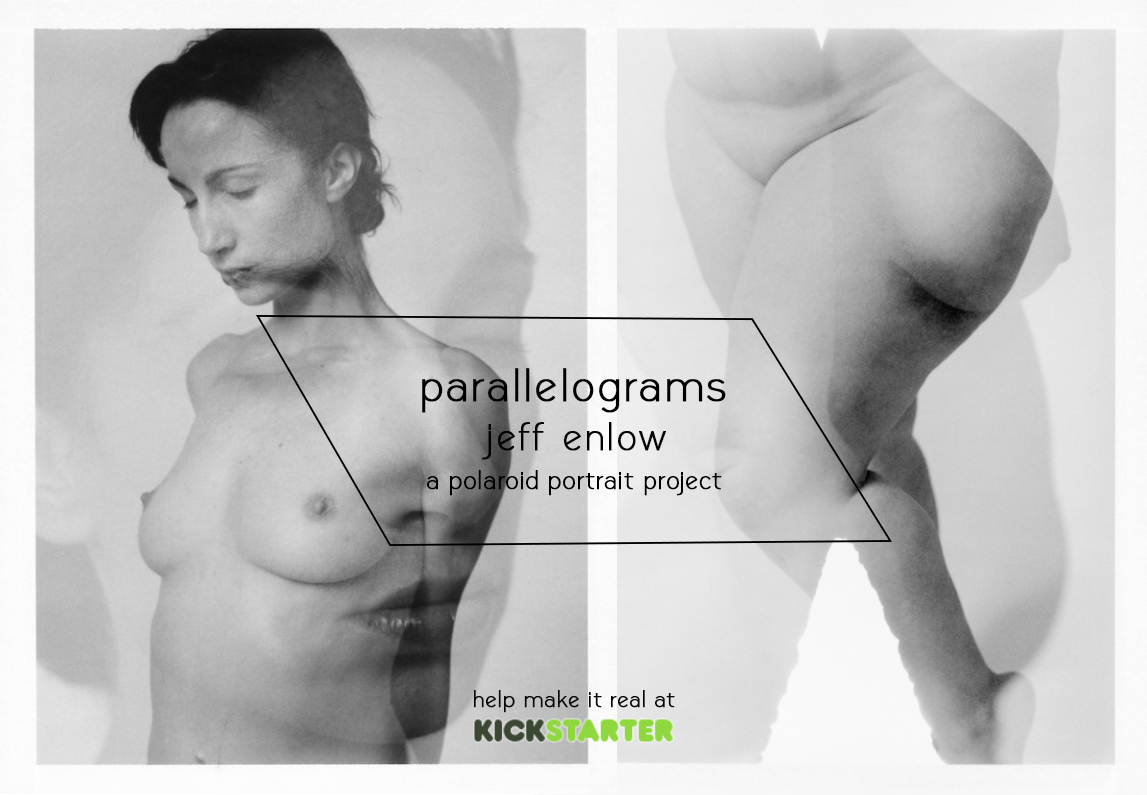 click the above image to be taken to Kickstarter

Parallelograms is a photographic nude portrait project that aims to bridge the gap between photography and painting. Each image is shot on instant film creating a uniquely physical image that evokes both a sense of beauty and vulnerability.

The series breaks with classic portraiture, utilizing multiple exposures allowing your eye to wander in the intersecting shapes of the body.

More about the project:

Why Multiple Exposures?
They allow your eye to wander and get lost in the intersecting shapes of the body. The multiple exposures also adds to the unique quality to the final image. The two images combine giving the photo a gestalt that is impossible to reproduce.

Why Its Urgent?
Up until now, all of my images were shot on the discontinued 4×5 Fuji FB45 instant film. The next step is to shoot a portfolio of images on the rarest of all films – the massive 20×24 Polaroid. With Polaroid out of business, the film hasn’t been produced in years and the stock of film is quickly disappearing, making using the camera a very expensive undertaking.

Why on Polaroid?
The size and detail of the 20×24 Polaroid is unmatched and it is the only format to truly give justice to these images.

How the money will be spent:
All the money raised will go to production costs of camera rental, models, and the costs of film. With only two cameras in New York, and a limited film stock, it costs roughly $500 to make one final image.

The majority of the money will go to the cost of film and rental of the camera.
Each image costs about $400 – 500 to produce. That’s per picture taken, including all the outtakes that don’t make it to the final set.
So if I want to shoot 10 – 15 images, I have to plan for 15 – 20 actual images shot.
Unlike with a digital camera I cant just shoot a bunch of frames, I have to make each exposure count.

It cost $125 per an image to get them scanned as well.

How the $10,000 breaks down:
Kickstarter takes about $800.
The gifts will cost about $2500. That includes printing books, cutting matts, making the posters and prints.

The more money I can make the more images I am able to make, and more models I can work with.

Once I receive the funds, I will immediately go into preproduction, which will include casting, planning all the poses, and test shoots. This will take about two weeks.

Then I will do 2-3 shoots during a month-long period.

After I have all the images, I will have to send them off to get digitized, which will take another few weeks.

Once I have all the digital images, I will start sending out prints and putting together the books printed by Hemlock Printers. The design and printing of the books is what will take the longest and could be as long two months to complete.

As each element is done I will send out everyone’s gifts. And I’ll be blogging the entire way so it should be a fun ride.

Currently, I’m the News Photo Editor at Corbis Images.
Prior to that, I was a National Geographic Explorer documenting the California Delta for a year.

I work and live in Brooklyn, with my Fiancé and two cats.

In 1976, Edward Land developed the 20×24 camera to take portraits at the annual shareholders meeting.  Today, there are only five cameras scattered around the world.  The New York camera, run by John Reuter and Nafis Azad, is the most prominent and often used.

The camera is popular with artists like Chuck Close, Julian Schnabel, Mary Ellen Mark, David Levinthal. You can learn more about the camera at www.20x24studio.com